UFC women’s bantamweight champion Amanda Nunes battered Raquel Pennington for four-plus rounds en route to a definitive title defense. If things had been handled properly, the fight would have ended after four rounds. 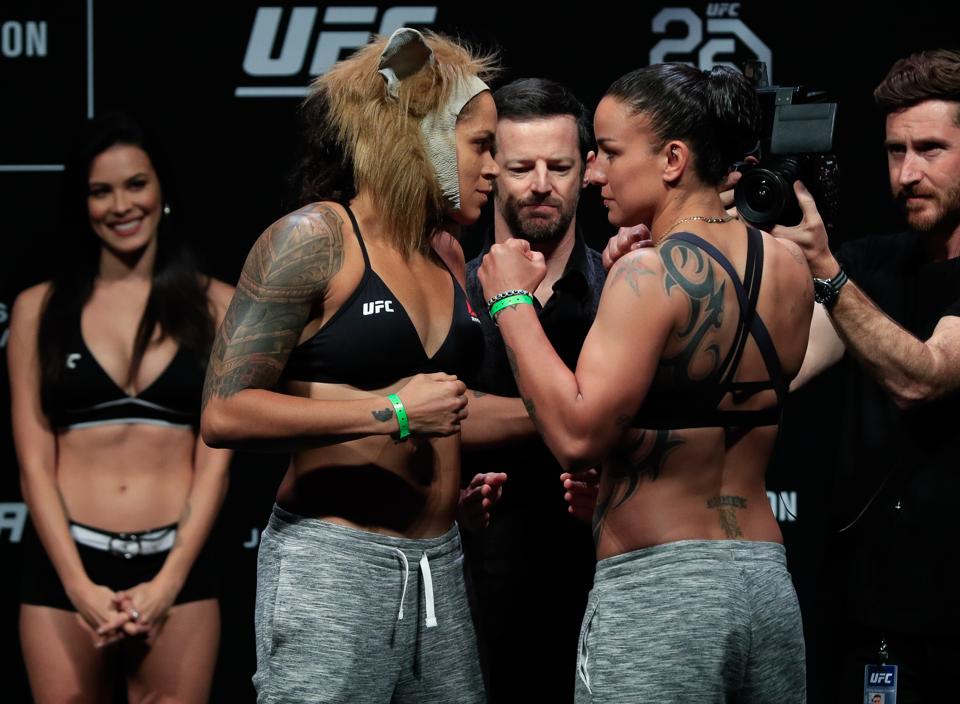 RIO DE JANEIRO, BRAZIL – MAY 11: Opponents Amanda Nunes (L) of Brazil and Raquel Pennington of the United States face off during the UFC 224 weigh-in at Jeunesse Arena on May 11, 2018, in Rio de Janeiro, Brazil. (Photo by Buda Mendes/Zuffa LLC/Zuffa LLC via Getty Images)

Nunes’ leg kicks, takedowns, ground-and-pound and hard strikes to the face left Pennington with bad swelling in her face and a possible broken nose. After the fourth round, Pennington told her corner she was done and wanted the fight stopped.

They encouraged her to keep going and that was a horrible decision. In the fifth round, Nunes continued the assault until the referee stepped in to call a halt to the fight. Unfortunately for Pennington, by that time she was a bloody mess.

Almost everyone in the MMA community, fighters and members of the media, agreed that sending Pennington back out for the fifth round was the wrong call.

That last minute of damage shouldnt have happened

They should have never let her go into the 5th round like that.

That’s a tough call for Raquel’s corner, honestly. Title fight. How many of those do you get in a career? But I would have thrown the towel the second Nunes took her down in the fifth. No miracle was gonna happen after that.

That pretty much goes against everything a corner is supposed to do for a fighter. https://t.co/tx9ca5IACh

If Pennington was getting a flat purse (no win/show), does her corner stop the fight earlier? I’d like to think so. No other explanation for that recklessness. The corner works for the fighter. If she wants out, let her out. Live to fight another day.

Think about how insanely confident fighters are.

Think about how crazy it can sound when they profess their strengths.

They’re the most confident people I’ve ever met.

For a fighter to say they don’t want it anymore is the hardest thing for them to admit.

Coaches should throw that towel…sad 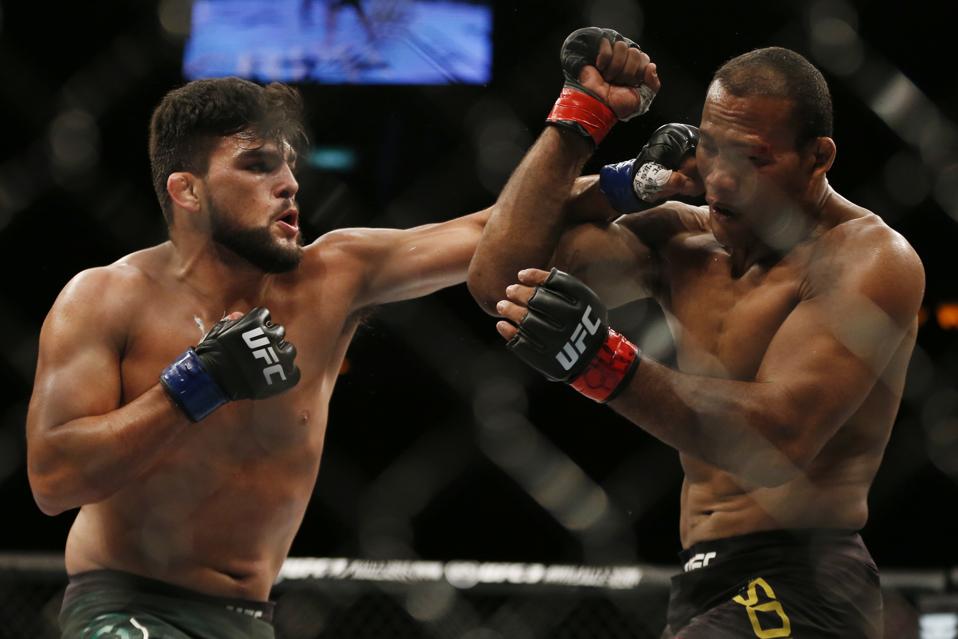 In a back-and-forth battle, Gastelum eeked out the tough split-decision victory over the legendary Souza. Gastelum dropped Souza in the second round and it appeared as though the American might get the stoppage win.

However, Souza gutted it out and landed his share of shots in the latter moments of the round. Souza seemed to have won the first round and you could make the case for him winning the third, but two judges didn’t see it that way.

Gastelum may have positioned himself to face the winner of the Robert Whittaker vs. Yoel Romero bout at UFC 225 in June.

Here is a look at all of the results from Rio de Janeiro. 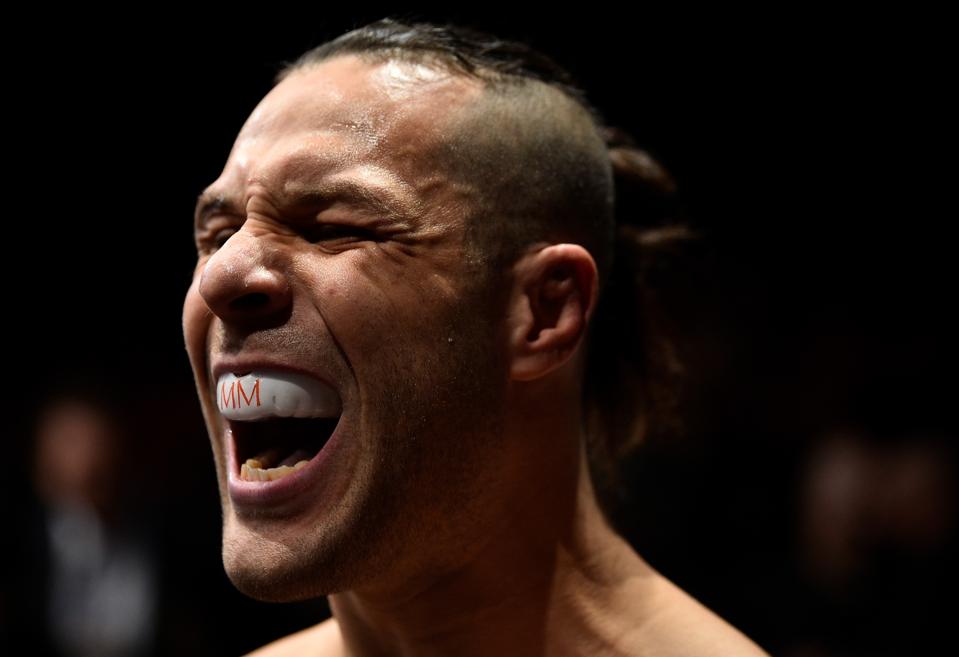 FRESNO, CA – DECEMBER 09: Markus Perez prepares to enter the Octagon before facing Eryk Anders in their middleweight bout during the UFC Fight Night event inside Save Mart Center on December 9, 2017 in Fresno, California. (Photo by Jeff Bottari/Zuffa LLC/Zuffa LLC via Getty Images)

After an early takedown from Bochnovic, Perez quickly transitioned to take his opponent’s back. He won every transition on the ground and secured the submission victory via rear-naked choke within the final 45 seconds of the first round.

THERE’S THE TAPPerez starts the night off STRONG for Brazil. #UFC224 pic.twitter.com/Ntcf27EFJ8 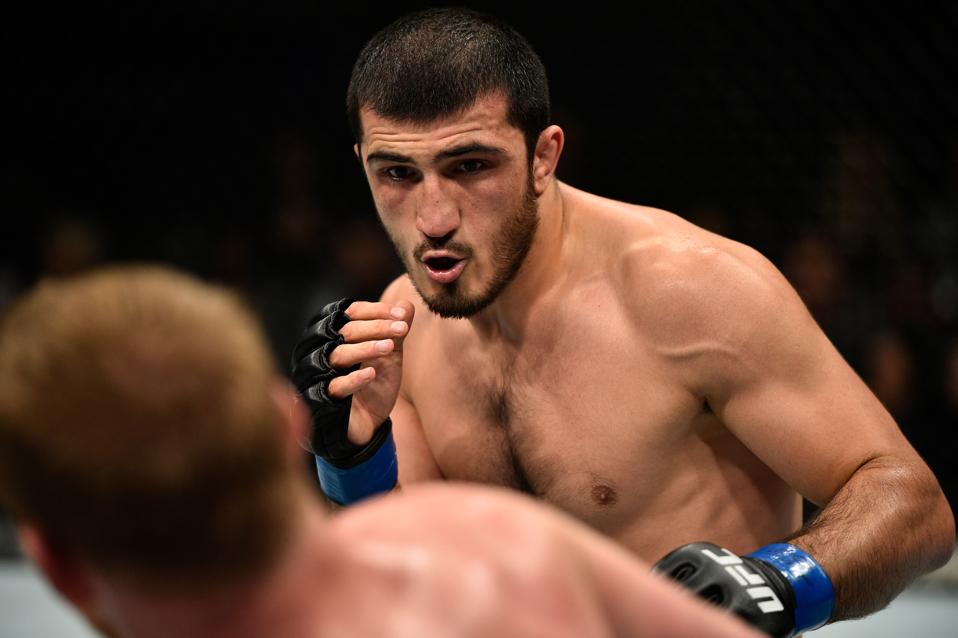 Mina came in undefeated, but he couldn’t find a rhythm against Emeev. The latter secured three takedowns and controlled the action on every level. In the third round when Mina needed to amp up the pressure, he couldn’t find the energy to chase the finish he needed. 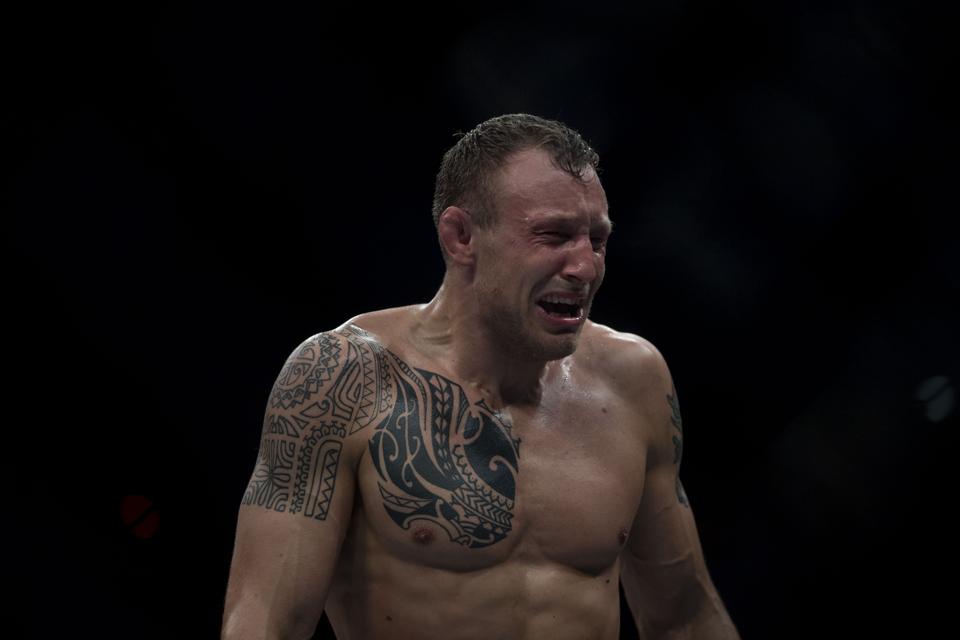 Swedish fighter Jack Hermansson cries after winning the fight against Brazilian fighter Thales Leites (out of frame) during their middleweight bout at the Ultimate Fighting Championship 224 (UFC 224) event at Jeunesse Arena in Rio de Janeiro, Brazil, on May 12, 2018. (Photo by MAURO PIMENTEL / AFP) (Photo credit should read MAURO PIMENTEL/AFP/Getty Images)

Leites will be kicking himself for a while after this one. He had possibly won the first two rounds against Hermansson and the latter injured his rib in the second frame. With an obviously compromised opponent in front of him, Leites couldn’t take advantage of the situation.

Hermansson: I broke my rib in the first round. I felt it floating around. It was the most painful thing. #UFC224

He tried an ill-fated Anaconda and Guillotine choke, but he wasted energy when it was obvious he didn’t have either sunk in deep enough–especially against an opponent whose arms are as long and powerful as Hermansson. The last choke was broken and Leites found himself mounted and finished with strikes moments later.

It was an odd change of events and a horrible loss for Leites.

What a finish @jackthejokermma way to dig deep thru adversity #ufc224

On the flipside, it is a courageous and statement-making victory for Hermansson. To fight off the pain and discomfort from an injury like that to get a stoppage win is noteworthy.

A badly swollen right eye kept Sultan Aliev from competing in the third round. He caught a short left hook right under the eyelid in the second round and the swelling began almost immediately. Alves was in control of the fight through the first two rounds.

Warlley Alves defeats Sultan Aliev via due to injury after the second round.

That eye is disgusting. #UFC224 pic.twitter.com/FcaiO9UKPZ

Aliev would probably have needed a stoppage in the third round, but with the massive swelling, his corner made the decision to stop the fight. 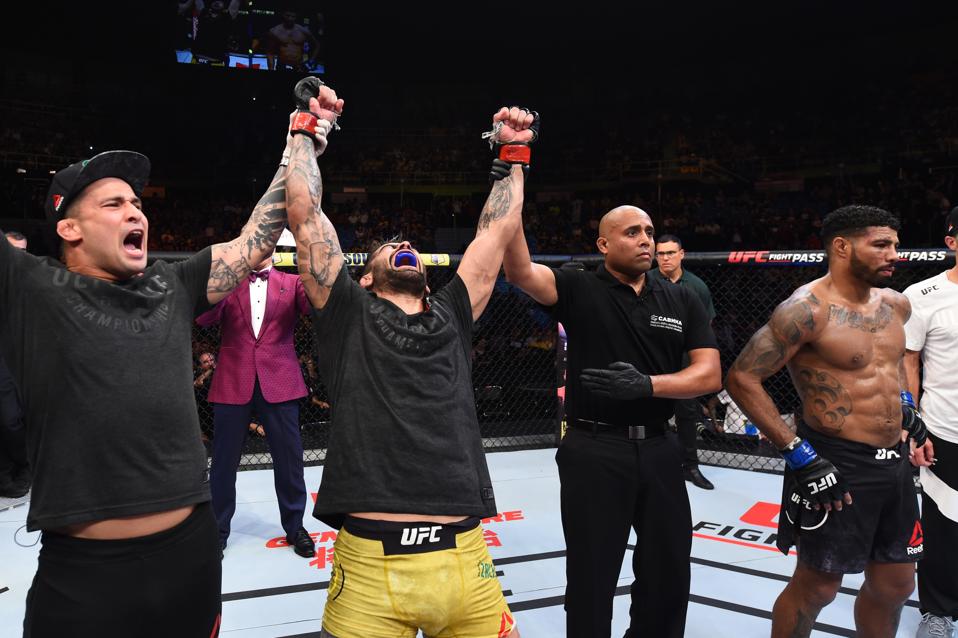 The speed and explosiveness of dos Santos proved to be too much for Strickland. The latter had never been finished in his professional career, but this spinning kick took him off his feet and set up the ground and pound.

Dos Santos has now won five fights in a row and he’s quickly making himself a notable presence in the welterweight division.

Davi Ramos finished Nick Hein via RNC in the first round without having his arm under the chin. #UFC224 pic.twitter.com/NHXni1XvAy

Once Ramos gets opponents to the ground, it doesn’t usually take long for him to force them to submit. Hein fought against an Americana that turned out to be a baiting move, before transitioning to the choke. Ramos couldn’t get his arm under Hein’s chin, but he’s so strong and heavy on the ground, he was able to create enough torque to force the submission.

Davi Ramos doesn’t have time for the second round. pic.twitter.com/xBUEsI7sCf

.@allelbows snapped this great photo of a smirking Ramos clearly trying to bait Hein to the ground and Hein having none of it. We found out shortly after what would happen if things went to the mat. #UFC224 pic.twitter.com/HXbUCDBsjH

After the fight, Ramos called out UFC lightweight champion Khabib Nurmagomedov. He’s a little premature with that move, but he looked like a force to be reckoned with at 155 pounds.

HE DID IT AGAIN!!!
Oleinik with the Ezekiel choke finish at #UFC224 pic.twitter.com/t9G9gnWJDl

In UFC history, we’ve seen two wins via Ezekiel Choke, and both of them have come at the hands of Aleksei Oleinik.

He added another one to his impressive resume of submission finishes against Albini. He locked in the grip in a standing position and Albini didn’t properly fight the hands. He took the takedown and landed on top, but that plays right into Oleinik’s hands.

From the bottom, he squeezed and forced the young Brazilian to tap out for the shocking victory.

Roberson was taken down early in the first round and it was clear he had no real answer off his back against a Jiu-Jitsu artist like Ferreira. He attempted to use power and explosiveness to get up, but that only positioned him for the head-and-arm choke that led to the finish.

Roberson didn’t tap and instead went out to force the end. 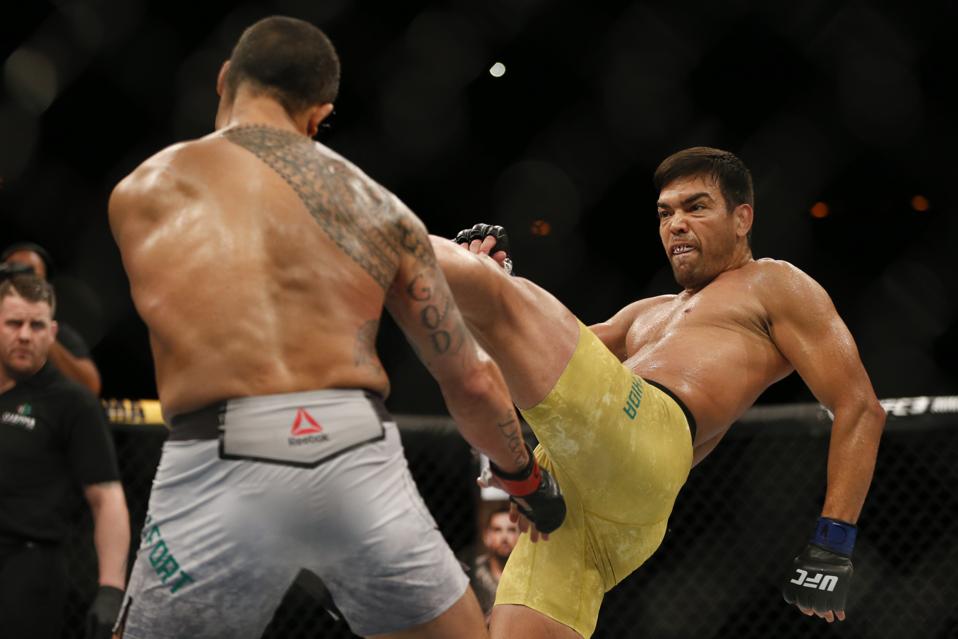 It was the worst kind of deja vu for Belfort. Anderson Silva famously used the front kick to stop Belfort in 2011. Machida planted the same kick on Belfort’s chin and earned the same result.

The end came after a slow and uneventful first round. In a manner that has become familiar for Machida, The Dragon exploded in the second to score the finish. Afterward, Belfort left his gloves in the Octagon and announced his retirement.

Through the first two rounds, Kelleher was doing a good job avoiding the worst outcome from the titanic punches Lineker was throwing, In the third round, Lineker caught Kelleher right on the chin with a left hook that looked as if he could have come from Joe Frazier.

One does not enter John Lineker’s wheelhouse. He brings it to you. #UFC224 pic.twitter.com/abZvPHDTqQ

Kelleher badly needed to take the fight to the ground, but Lineker kept stuffing his attempts. With Kelleher getting the worst of almost every exchange, it seemed he had two choices: take a decision loss or go for a finish and risk getting stopped.

The latter happened to Kelleher. 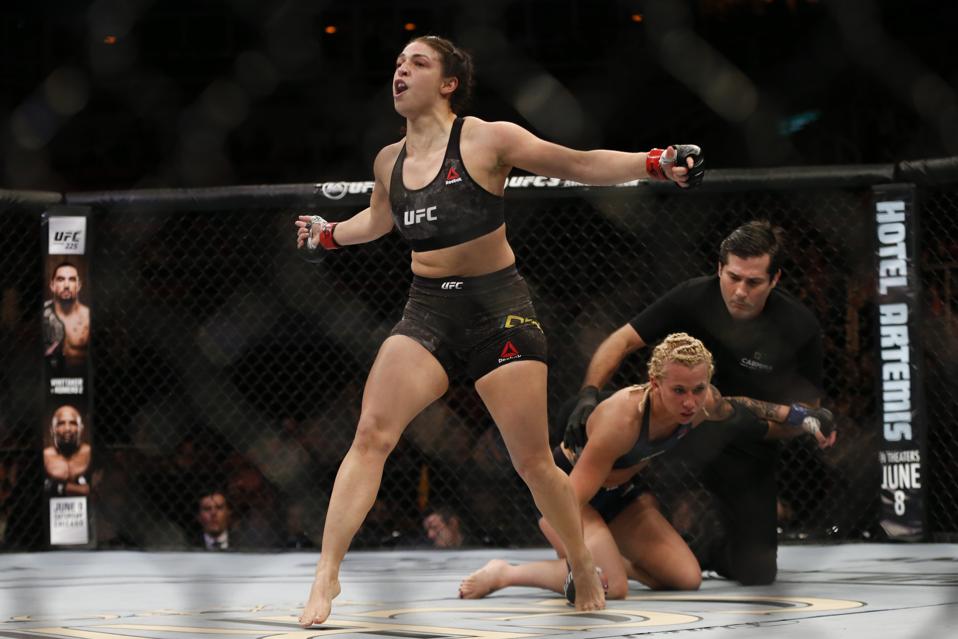 She missed weight by seven pounds on Friday, but she was right on the money with a big right hand that dropped Cooper. Truth be told, Cooper was in trouble and possibly out of it when the punch landed.

Dern secured top position with ground and pound and transitioned to the back for the rear-naked choke and forced the submission.

Mackenzie Dern def. Amanda Bobby Cooper by submission at 2:27 of the 1st round. #UFC224 pic.twitter.com/sPuEVCjNE3

There was a ton of bad blood on Cooper’s side before the fight, but ultimately, Dern is the one who emerged victoriously. That said, she surrendered 30 percent of her purse for missing weight and the win has a bit of an asterisk next to it because of how grossly overweight she was for the bout.

Will be back in Goa in few weeks: Parrikar in video message

Trending: A New Pic Of Hrithik Roshan From Super 30 Set

Deepika Padukone: Appreciations have not been constant in my journey

PS5, Xbox Series X compared: Design, specs, features, price and everything else in between – The Financial Express